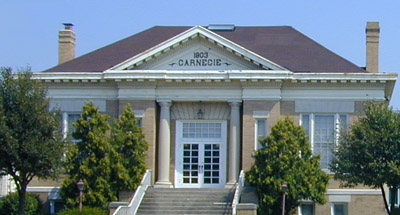 WHAT HAPPENED: A Haunted Library in Bryan, Ohio. At first glance, Bryan, Ohio, is a sleepy town tucked into the northwest corner of the state. It s claim to fame is being the home of Spangler Candy Company, manufacturers of sweet treats like Dum Dum suckers, candy canes, circus peanuts and other favorites. It s also home to the Ohio Art Company, original manufacturers of the iconic toy, the Etch a Sketch. Dig a little deeper though, and you ll find a tragic past event with eerie ties to the present. Many locals point to the main branch of the Williams County Public Library as a fixture of the town. The Carnegie portion of the facility was built in 1903 and continues to serve as the adult/teen area of the library, but it s what happened in 1946 that is of special interest to fans of the paranormal. Emily Abernathy, a Bryan librarian, was stabbed to death in the library s basement. James R. Engle was found guilty of the murder. While the gruesome act shocked the small town at the time, recent events have brought the story back into the limelight. In 2015, Capture1 Studios partnered with Friends of the Bryan Library to produce a film-style documentary exploring the murder and the aftermath. As part of the project, the Ohio Researchers of Banded Spirits (ORBS) conducted a paranormal investigation at the library with some impressive results. It s common for ghostly happenings to occur where a death took place, especially if it was a violent one such as Ms. Abernathy s. Combine that with numerous reports by library patrons & employees and ORBS, and the probability of this being an actual haunting is quite high. While the library held a special event and tour in conjunction with the movie s release, it doesn t regularly host ghost-hunting events. However, the building is open to the public during regular hours of service. If you re interested in doing your own research, we recommend reaching out the library s director, Jeff Yahraus, to ask about increased access and accommodations. Happy ghost hunting, friends!