WHAT HAPPENED: "Lusk's lock is a legendary lock and part of the Beaver Creek Canal System (Northeast Ohio) that was the lifeline of the area in the 1800 & 1900's. Lusk's lock is said to be haunted by a worker of the lock who died there. You can see him walking along the lock in his work clothes. Also a man named Mike Lusk was working on the Lock in 1836. He came from England along with his wife and daughter. His wife did not like being stuck out in the wilderness alone while he worked on the lock, so one day she took off and he never saw her again. She left behind their three year old daughter. He tried to have a neighbor watch her, but she cried for her daddy all the time. Mike ended up taking her with him on the job. Sadly, she developed double pneumonia and it killed her. Mike Lusk buried his daughter on the east side of Lock 27, hence the name Lusk's Lock. She is on the left side at the top of the stairs.    Gretchen Gill, the daughter of Sandy and Beaver Canal engineer E.H. Gill, has been the focus of a legend at Lock 27 for many years.  According to the legend E.H. Gill, his wife and daughter were traveling from Europe to the United States, his wife died on the way and was buried at sea. The grief stricken father and his little daughter, Gretchen, completed the journey. At the time the lock above Sprucevale was being built, Gretchen contracted malaria and died. A crypt was prepared in the masonry of the lock and Gretchen was entombed there for a while. When Gill resigned during the panic of 1837 and decided to return to Europe Gretchen's casket was removed from the crypt in the lock and taken aboard ship to be returned home for burial. On the trip, a storm at sea took the ship and all were lost. E.H. Gill and Gretchen joined their wife and mother in the waters of the Atlantic." Source:https://www.carnegie.lib.oh.us, Beaver Creek Historical Society, Wikimedia, 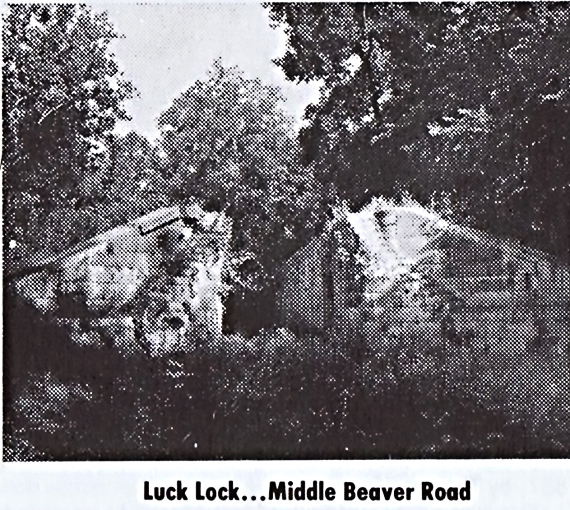